If you’d been following the blog, you’d know I religiously document my ‘only’ trip out of Hong Kong, to Jiangmen, China at least once a year. Every year I visit, i notice changes. Villages and farms had turned into modern concrete town houses and apartments. What’s even more haunting is that the first time I see a real skyscraper in Jiangmen. It’s unprecedented besides the local TV tower. The Wanda Plaza opened last November. Phase I and II comprises of office suites, hotel and a gigantic shopping mall. I did not have time to visit the interior, but the brief drove-by to the underground garage told me it’s one ambitious landmark of the city. The size is nothing i’d even seen, i’d imagine the size of a stadium. This is what exactly the real estate tycoon ‘2nd richest men in China’ would do. It wowed me to see such shiny skyscrapers and the shopping avenue nearby. It also questioned me who are these occupants of those office suites. To my understanding, Jiangmen is not too much of a business hub. Transportation is not as well facilitated as the nearby GuongDong cities

Bicycles got replaced by motorbikes, now automobiles are replacing motorbikes. Things do improve, do evolve at a pace we do not know about. The husband-in-law I spoke with had said they do not make a lot of money, but the expenses are really nothing compare to Hong Kong. Properties are much cheap, you’d buy a place not even need to stress about renting it. He claimed the trade off is the lack of modern city life. He does not want to worry about politics and all. All he cares is he and his family is getting all the basic needs, stay healthy and get on be happy with a normal life. He said he got really fed up with the government manipulation on the TV programs from Hong Kong. Not that because he could not see what happen in Hong Kong, it gets really annoying; just like when seeing a movie in theatre a big guy walk in front of you the whole time (this parable comes from me). I told him how I admire with the choices out there with the CCTV network, lots more program to choose from than in Hong Kong even a free sports channel is available. A good way to inspire their people to become athletes?

This time we had an alternative water route passing thru the Maliuzhou Waterway. It’s our first time passing thru it. I got to see some of the infrastructural development along the waterway in HengQin. It’s almost like a piece of blank paper, up to however they want to use this piece of flat land. I already see a few top hotels built along the shore. They’re there to cater the tourism needed for the Chime-Long Ocean Kingdom opened in 2014. It’d probably the last time we’d be traveling back the Jiangmen by water. Sooner or later they’ll cut the service between here and there. The schedule will changed to some odd hours which we’d not be able to meet for a single-day trip. We traveled back to Hong Kong for 4 hours by bus with congestion halfway thru. 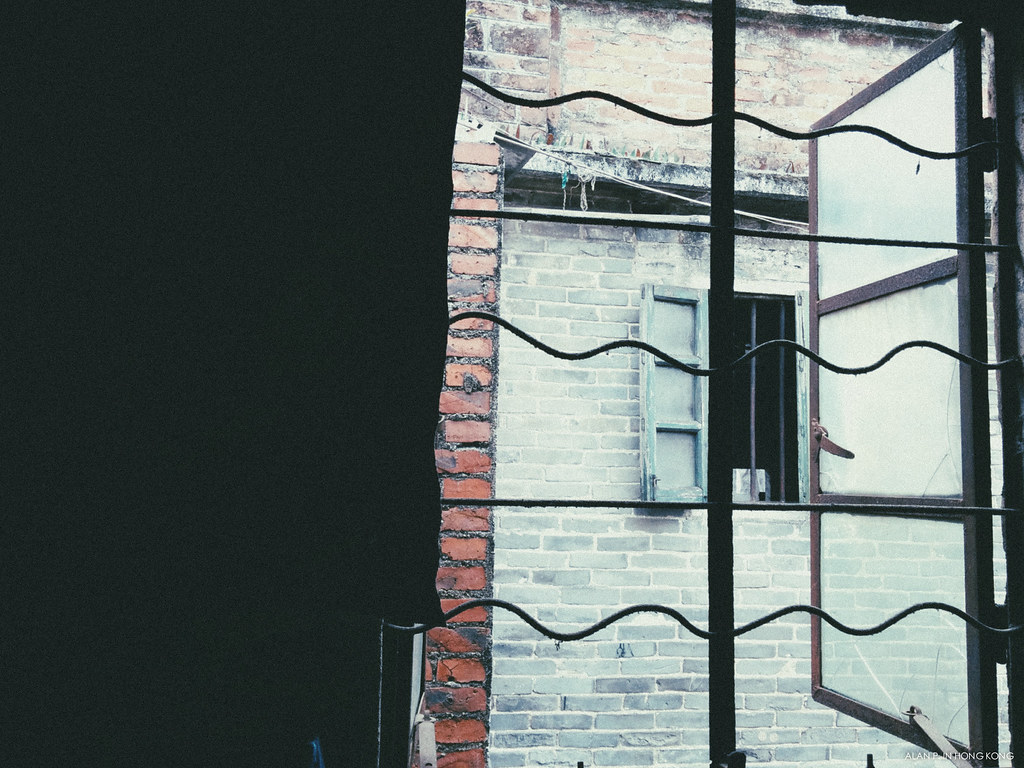 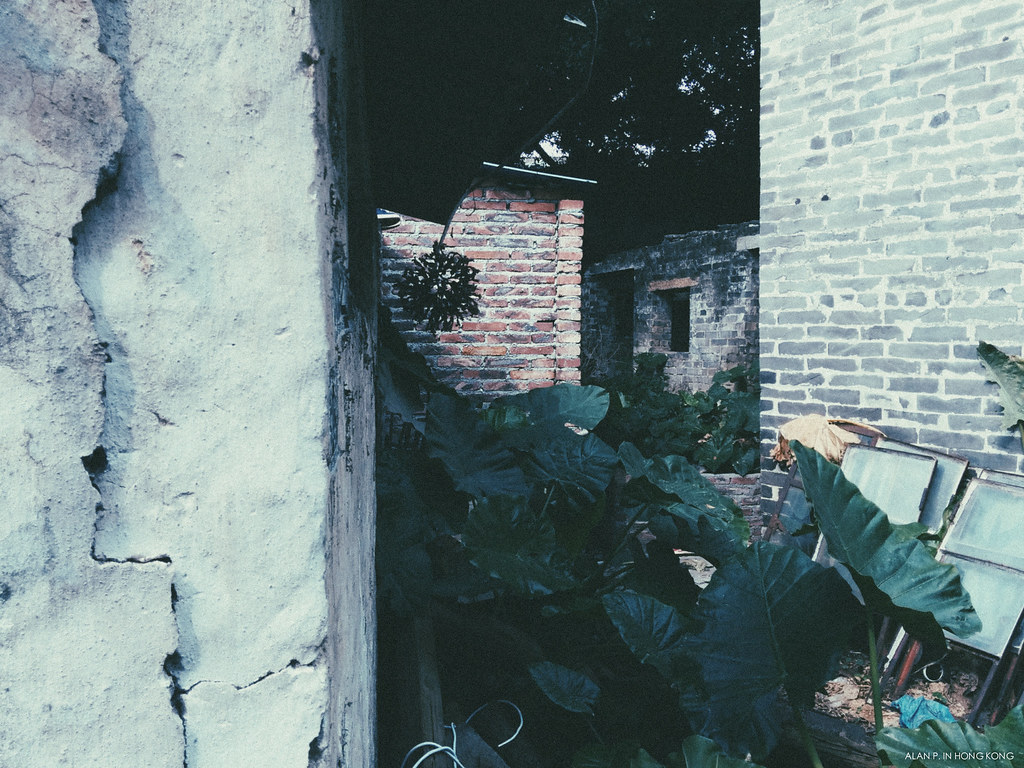 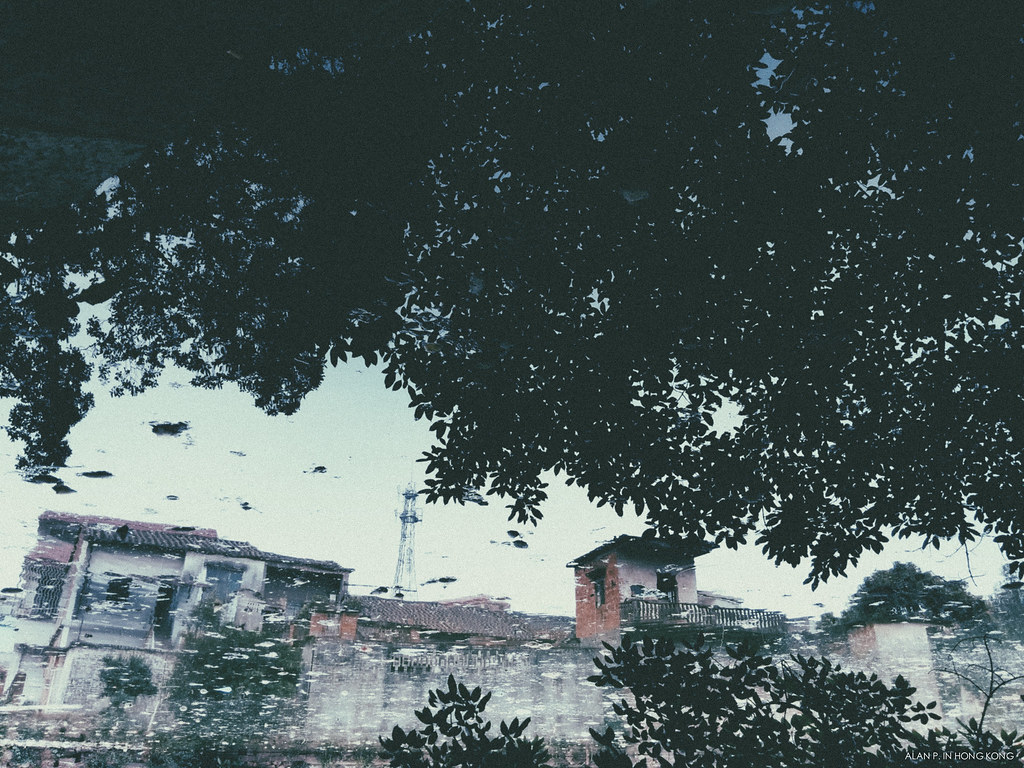 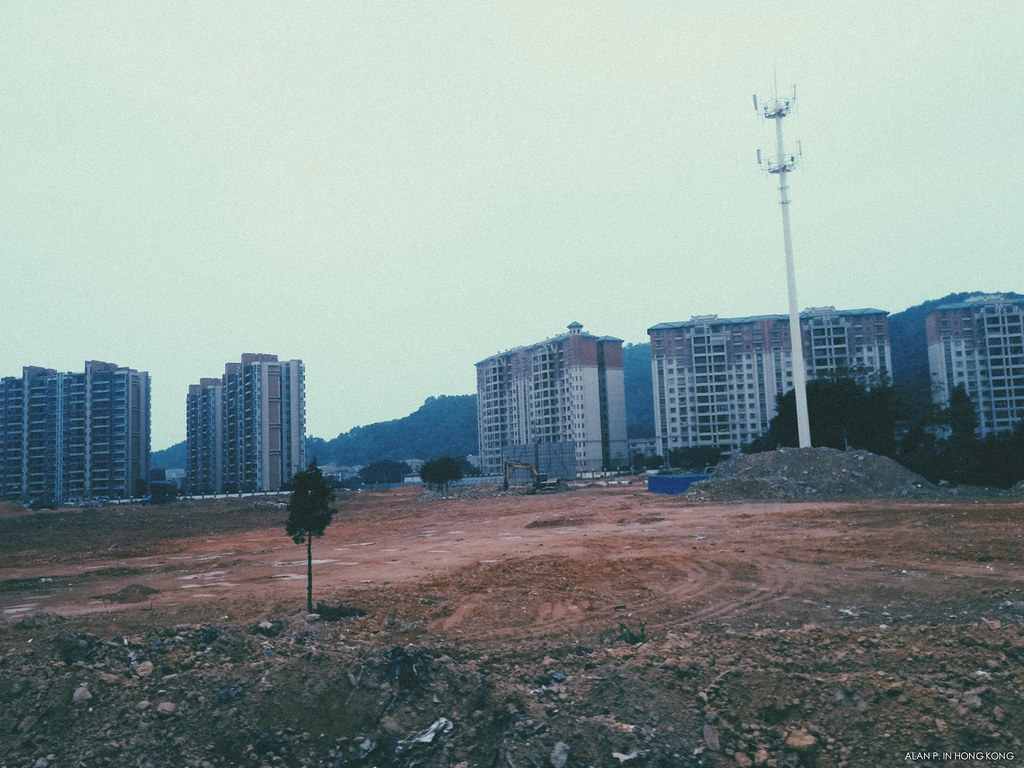 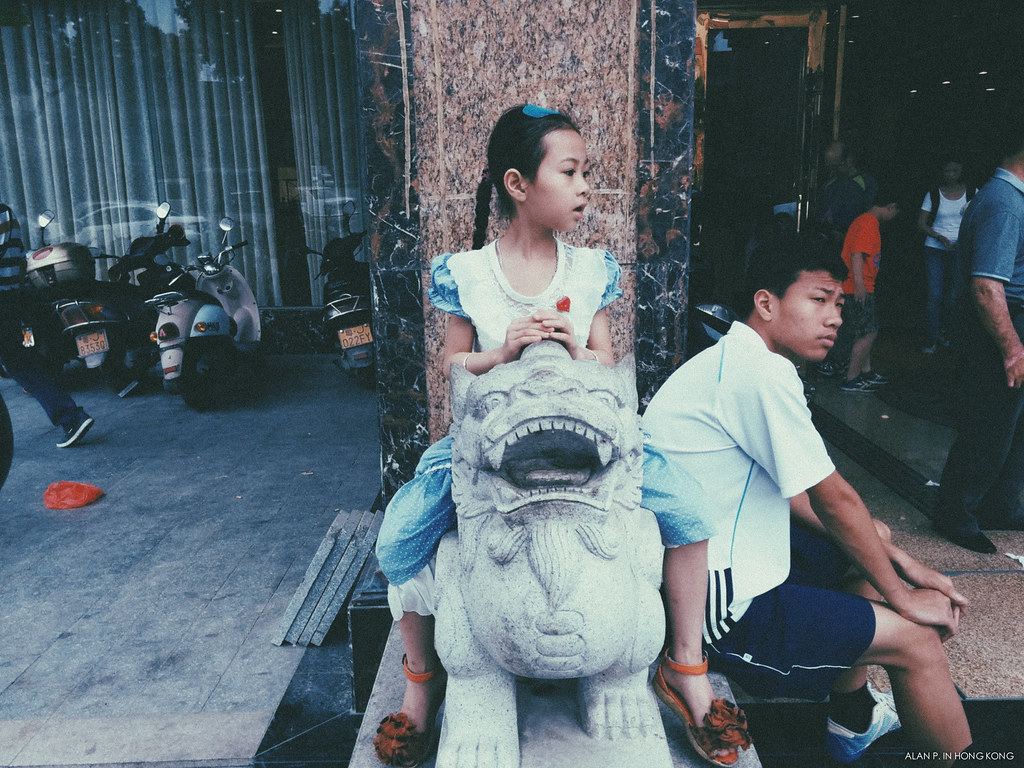 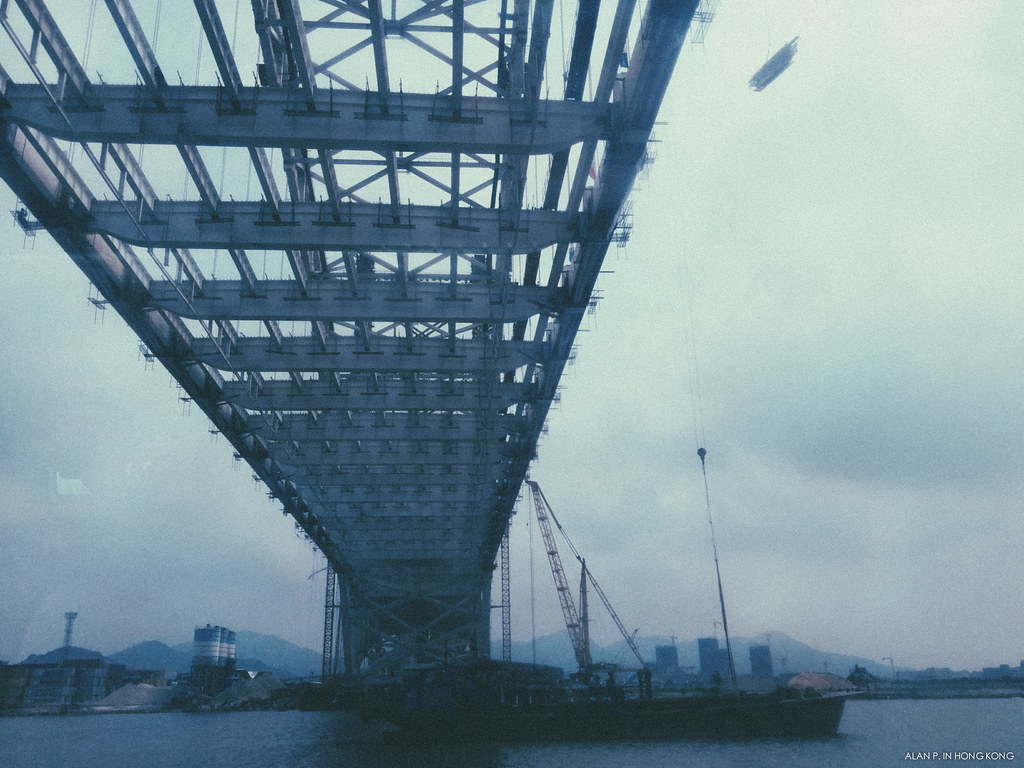 Fanling Wai translates into Walled Village of Fanling. Fanling or Fan Ling is the northern part of the New Territories, Hong Kong. It’s two train stops from the border between Hong Kong and China.

No matter how discontent I’m toward the urban development of Hong Kong (mainly because of the total ignorance on the preservation of valuable old structures/remains), my conquest of seeing the past of Hong Kong is still underway.

The bright sunny day was perfect to bring along my X100. It’s my choice for expedition.  I have my film simulation set to Astia, it’s my fav’. I wasn’t really stressing myself when composing. We shouldn’t be anyway. The whole point of me travelling there was to experience the encounters. Photography only enhances and documents my experience of my travel. I would simply put aside my street photography thing…

Of course when there were easy shots I take them. It messes up my settings to go from scenery AF to small aperture MF. And yea, i’m not that lazy as you’d see me doing a few candids.

As I was approaching the entrance of the Fanling Wai. I already see some remains of the village. Such as the former Fanling primary school. When you see the red lanterns, you know you’re in the right place!

The driveway that enters the village reminds me of Taiwan and even Japan. Perhaps it’s common in the N.T. of Hong Kong, not so for me. The village is pretty much still alive.

The preservation of the village buildings were done by the owners. They can tear down the whole house and build a new condo. However, some (older generation) still prefer the retro feel.

It’s hard for me to imagine people in Japan lives in village like this. They must know each other very well in the neighborhood. I don’t even know what my neighbors’ names are in my apartment building. Sad…

I still vaguely remember there were a few picnics i attended while i was a child, living in an old apartment building. The management committee of the building had organized picnics and activities. The current newer/modern ones are lacking of these things…

Travel makes us learn more. Learn about how the community functions, how the people lives, and more. Although I’m not traveling abroad, it’s a great experiment of myself understanding the people just by observation.

The front view of Fanling Wai

I’ve seen this in picture online. Now I’d been there in person and snapped my own. It makes me appreciate the pictures i’ve taken even more. My mom always says there’s no need to travel, just watch the travel programs and you’re there. When we get into this topic, there always a fight. I think even our family can afford traveling (which we’re not really at the moment), we won’t travel at all…

There’re many countries i wish to travel to, Italy, Ireland, France, New Zealand, Korea,… I’d travel alone even my family won’t and no friends would.

Inside of Fanling Wai

People here are pretty laid back. Hanging out, drinking beer already in the late afternoon.

Man searching for tips for the horse racing tomorrow in his front porch.

There are quite a few old trees in the village. And only one that I saw was a wishing-making tree. Similar to those in Lam Tsuen.

Battle canons at the front entrance.

I think this village is lacking of a museum. I’d like to know more about the history happened here. The walkabout only got me knowing the present. It’s missing the past. Our government should build a museum nearby…sadly, the government had built a northern district park next to it…

I briefly spent my late afternoon there. I’ll visit to another walled village next week.