The Umbrella Revolution had taught me about the role of a photographer. Seeing all the great live images from the photojournalists, does make you wonder if you’d be able to get some. Answer is simple, yes and no. Yes, if you get paid. No, if you ain’t get a dime from a single image. There’s a fine line between your passion and your own personal safety. Riots and protests can go sour especially on the frontline when the civilians go against the police authority. You have 50% chance of getting hurt without any insurance coverage, damaging your gear (insurance associated). I just think it’s not worth it to risk on any of the above mentioned unless yourself is part of the protest party. Give the job to the journalists and leave your passion behind until the situation improved.

It was my first time in life remembering how a protest escalated and had turned into a riot of such scale in Hong Kong. My first reaction was ‘Oh my god! It’s really happening’. Right after the surprising announcement by Benny Tai of the Occupy Central founder which’s the same day midnight, they moved up the schedule to occupy Central as the students have gathered at the Government HQ and sparked a huge impact thru the news. It’s a statement just like declaring a war only the students were guerrilla and the Occupy Central with Love and Peace Movement Group is the mercenary backed by the news tycoon Jimmy Lai.

How quickly a movement like this had brought all the international news correspondents to town. I still remember I tuned in the 6pm news report just when I got home. Just when the live reporter about to describe the situation, the riot police popped a few gas grenades out. This type of scenes would only be seen through TV on the soccer-popular countries. The reporter got choked and people were escaping behind. I thought it was a surprise too, but surprises like these were necessary to contain the situation like all riot police in the world. It’s just rare happening here at our home turf. Really rare. The announcement last night I thought i was witnessing something, but then when the protesters gone mad with the tear gas i thought i was witnessing history. The history of how citizen protect their rights to protest and voice their views in indifferences.

The tear gas had brought more people out to the battle ground at the Government HQ the day after. The protesters had jammed the entire highway. That even brought more aware people to visit the site on foot on the first day of work after all the chaos happened over the weekend. All business district without traffic is a joke. It was a little jog from where I work but I made it there twice during lunch and once at night on the early few days of protest. The speedway of both direction to and out of Central is sealed off along with many other major passages, even the world famous double-decker Tram cannot run through Casueway Bay to Central (oops to tourists). It’s the artery to the heart of Hong Kong. Drivers are forced to drive up to the mountain to go pass all the roadblocks. That’s why business owners do not support this Occupy act.

So here I give you an exclusive view of what you might not be seen at the protest, A walk on the artery of Connaught Road. 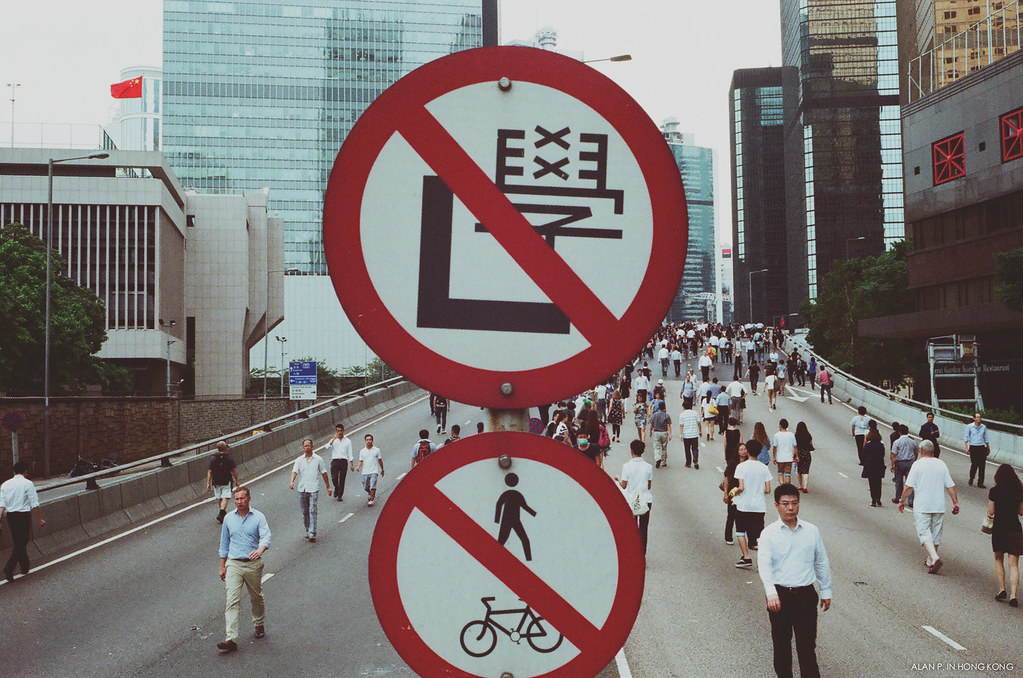 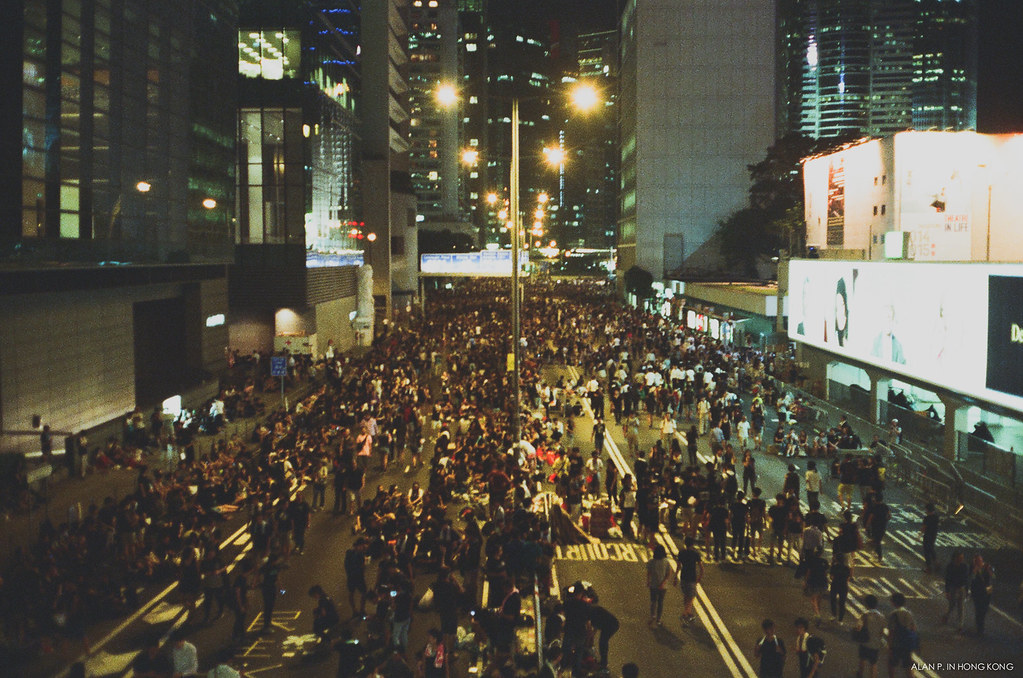 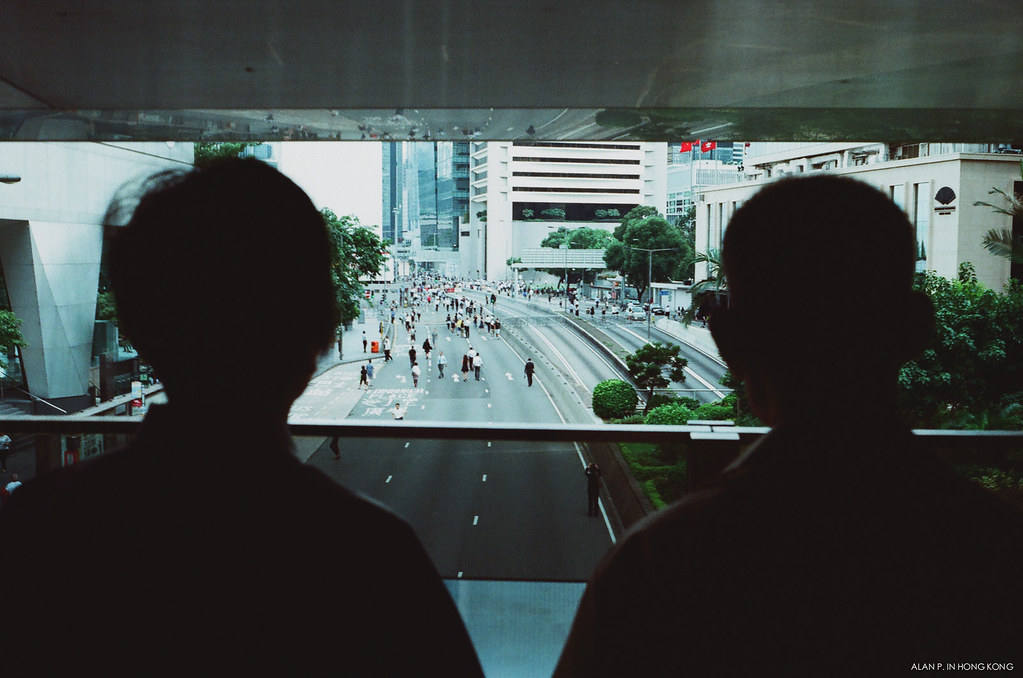 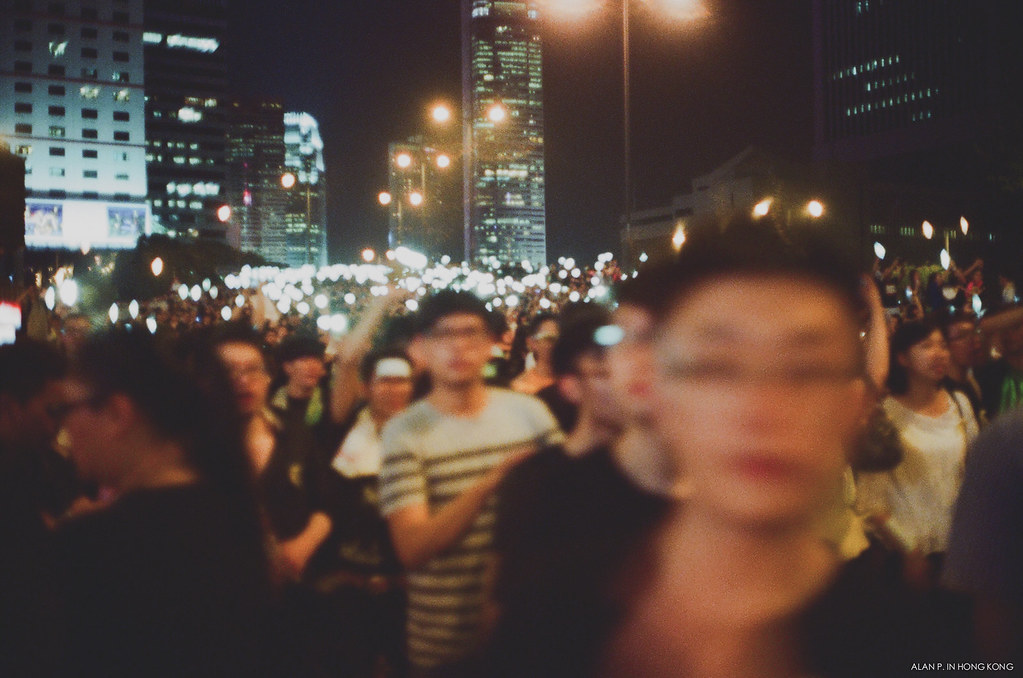 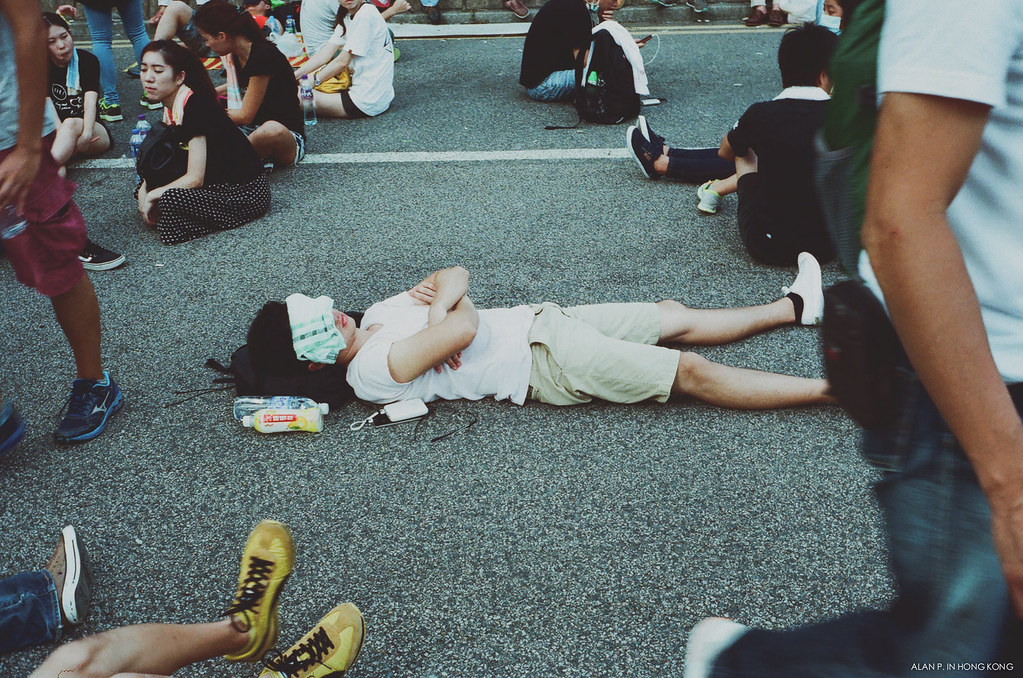 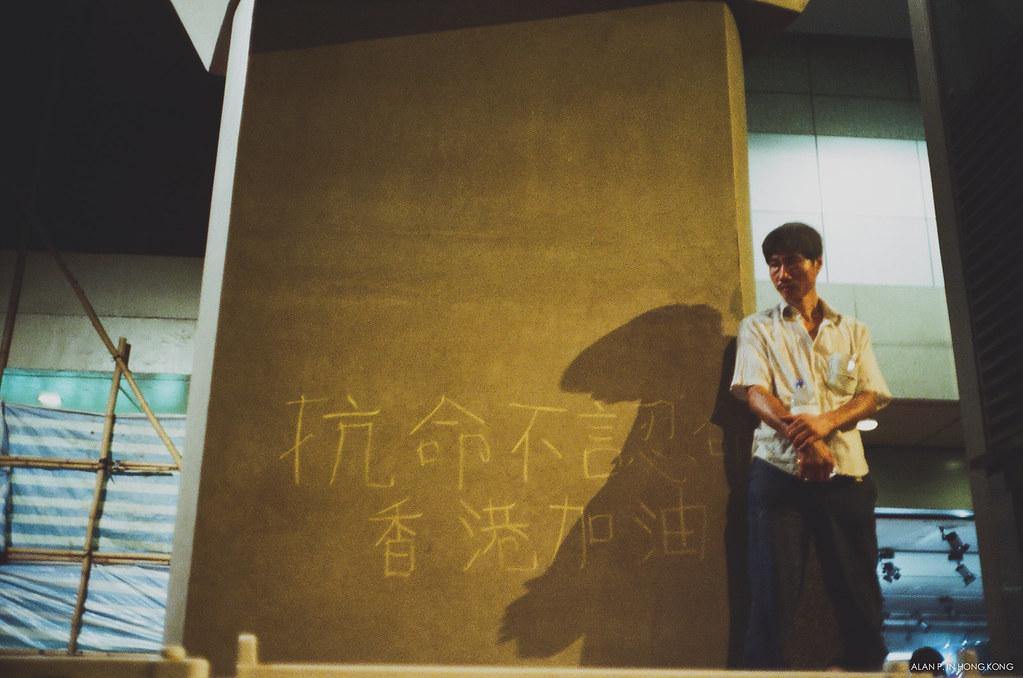 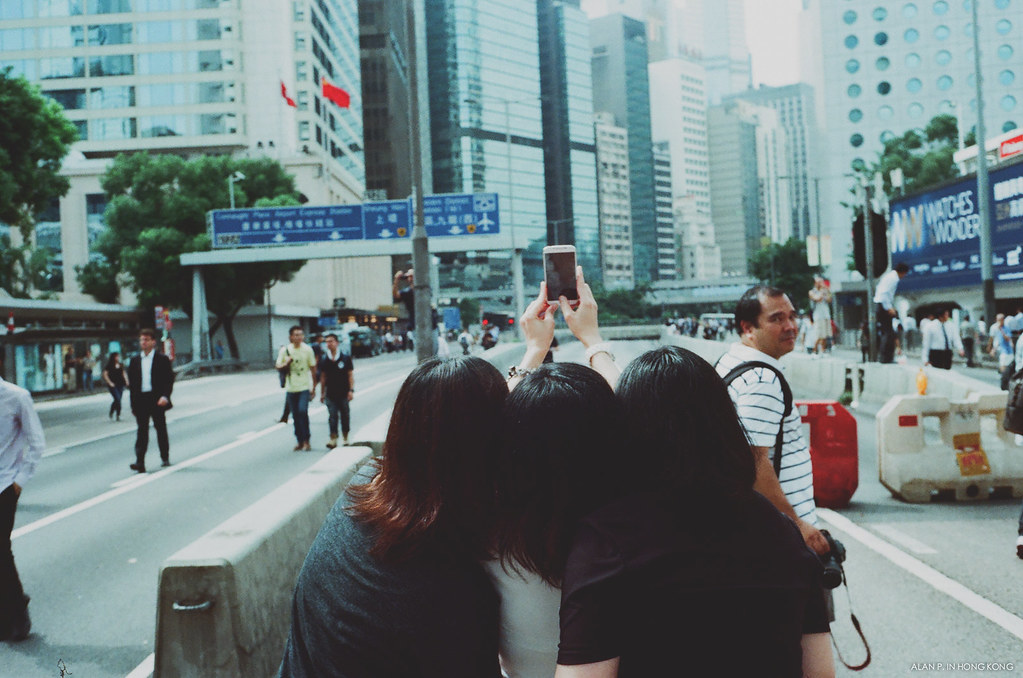 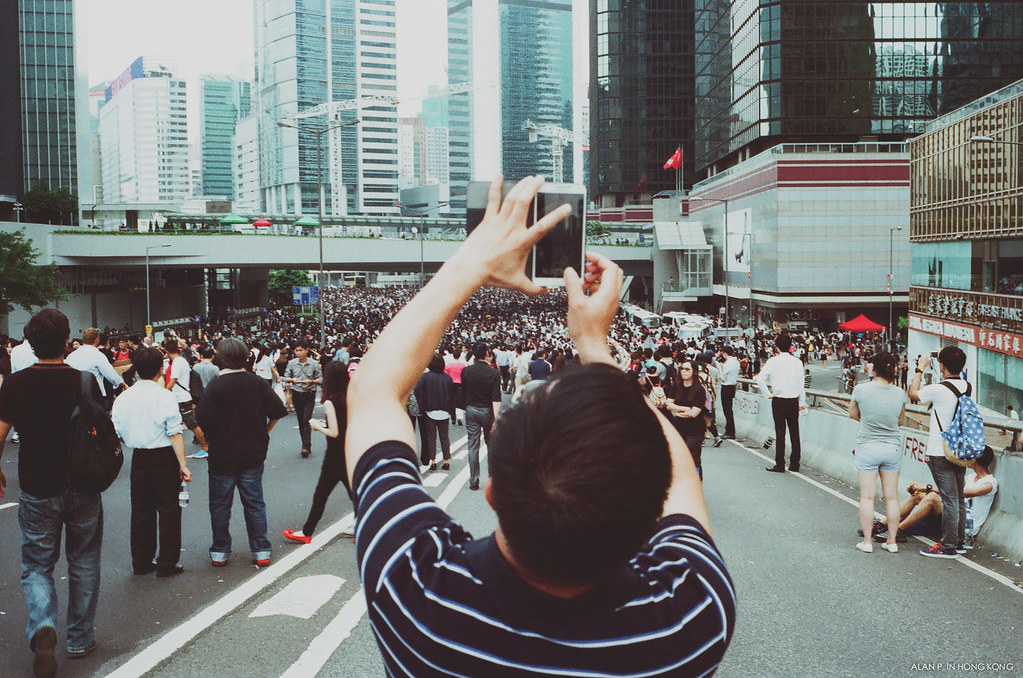 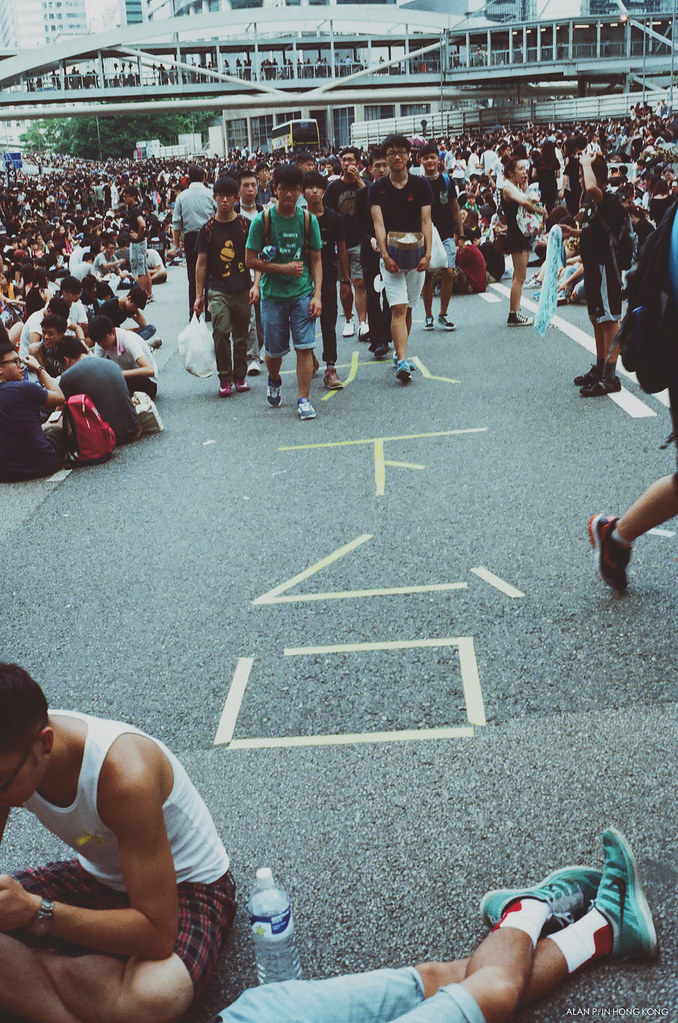 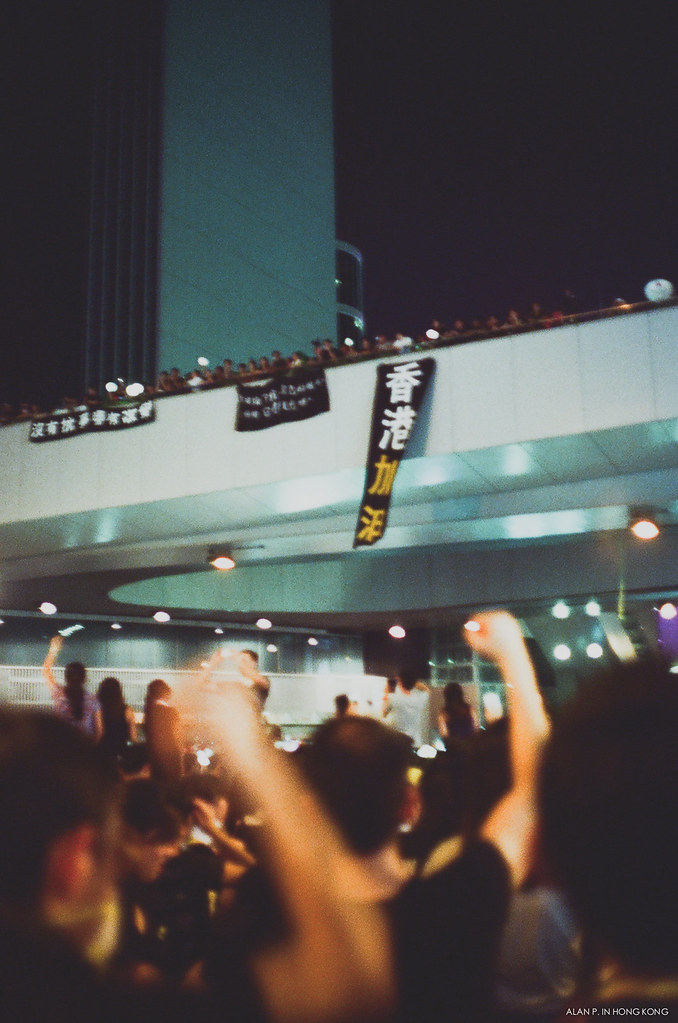 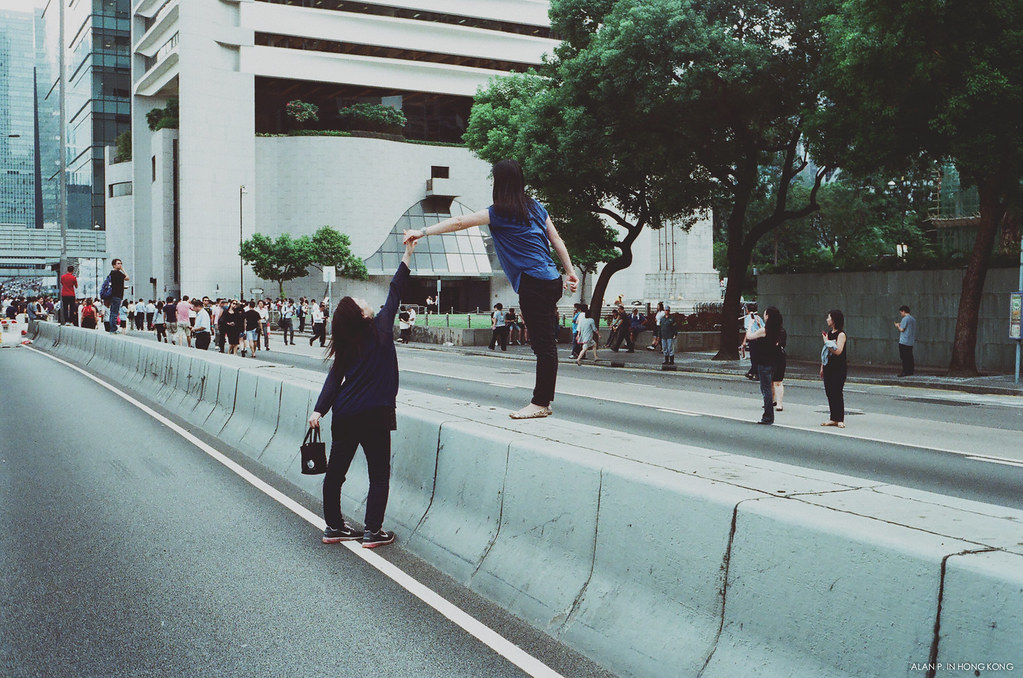 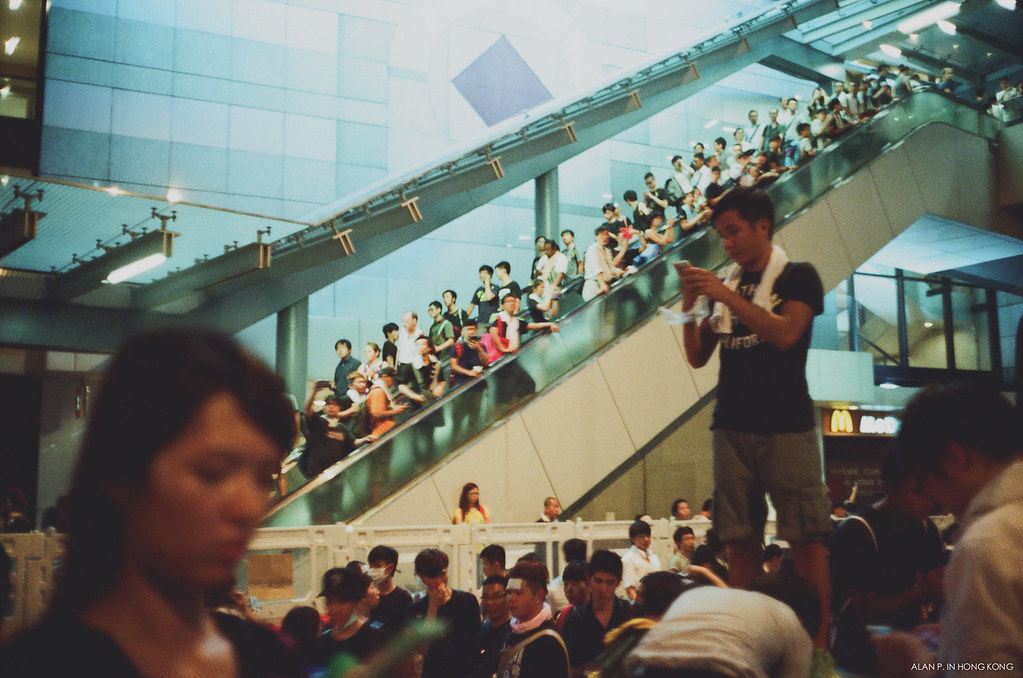 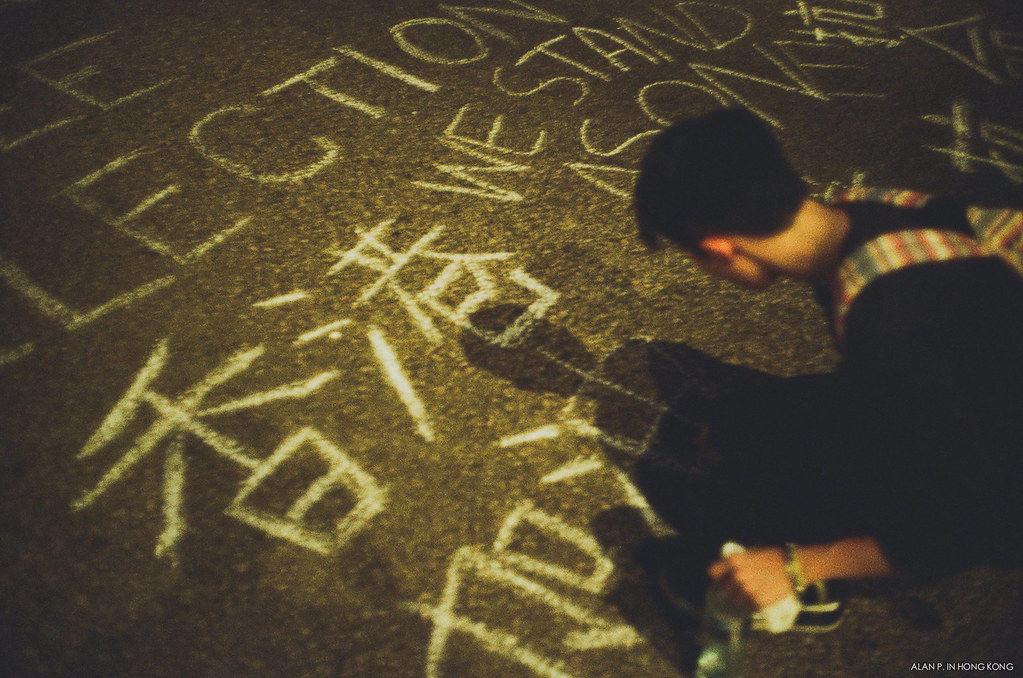 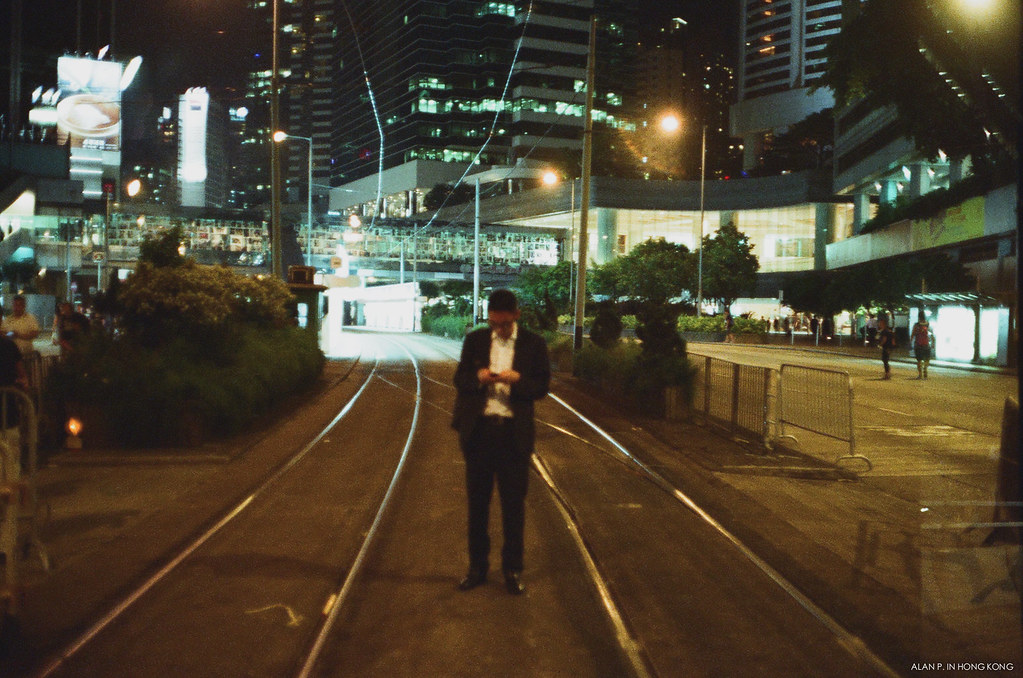 I’m not going to let my photos marinate as this rally is developing.

Day 2: Saturday
It’s not really day 2. Just that it’s my second day of visiting the rally. It’s weekend, it’s usual for people to come out and play. I’m a live example. Knowing there’s something big happening at the government complex. I paid another visit to see what’s developing.

It’s an afternoon with rain shower. It lasted for less than half an hour and the weather turned great again. One of the reasons I go there again was that, I did not get too many of okay photos from last night. Today was the day I felt a bit more confident about.

Last night’s rally the organizers demanded for a reply from the Chief Executive and his team. There wasn’t any until later today. The Chief Executive C.Y. Leung held a press conference shortly after I departed from the site. He said the right to adopt the National Education would leave it up to the schools with no deadline. And he won’t revisit this issue during his term of administration. I think that’s a fair reply to the public as to response to all the protestors from various groups/parties.

The Anti-National Education union is still gathering at the government building. They said they want NO national education ever in schools and the government is not firm on the dismissal. Their rally continues…

From the TV broadcast, I saw the youngsters hang out and enjoy their time. There were indie musicians performing. It’s almost like an open air festival.

When I thought of what I saw during the day, I quickly realized all the things were planned out by the organizers. Look at all the free entertainments, I’ve not seen family hang out that happy. Almost like a carnival if you don’t read my essay at all. Where does all the balloons come from? How do the musicians setup? Where are all these public speakers come from? And the free cotton candy? That led me to think about who’re masterminding the entire protest. It’s got to be political.

Not used to shooting in crowded again. I’m learning day by day. I only spent my precious 15 mins over there. It’s a little too short? A couple reasons, I’m not WITH the protestors. I think it’s wrong to stay there if I’m just there hanging out. It’s hot. I think I got what I needed to represent for the day. And one of my reasons was to shop for a coffee bean grinder. So off I went.

Last episode I had reader suggest that street photography is also, an independent photojournalism. I can’t agree more. I got just the right theme to do it this weekend.

Day 1: Friday
The biggest debate in the current Hong Kong affair is the mandatory moral, civic and national education in schools. And I was at the rally last night to witness this historic moment of my generation.

The loose end course syllabus was designed to allow flexibility for schools to adopt according to teachers. It’s set to start this school term. The Education Bureau had released a guideline to the public some time ago. Just that nobody knows what it’s about, there’s hardly anybody reads it because of the perceptive image of our motherland, The Republic of China.

I believe it’s the fear that Hong Kong people are facing. The return of the administrative power to China. We have fear over all the issues that matter to our people. It gets complicated and sensitive when anything relates to China. They love Hong Kong as our own, not bounded by China.

That brought all the parents, teachers, and students all over Hong Kong together to go against the government on this issue. This Anti-National Education Rally had started at the end of July by three parties – Scholarism (an political awareness group formed by secondary students), Parents Concern Group on National Education and Hong Kong Professional Teachers’ Union. They labeled the national education as brainwash.

The three parties a.k.a Anti-National Education Union had elevated their rally and brought it to the government building last week. The ‘Occupy Government Building’ rally initially had students hunger striking. And this week more old adults participated. There are 14 still hunger striking.

Some have said the rally is backed by some political parties as to influence voters on this weekend’s Legislative Council Election. I really don’t know. The Union called out everyone to dress in black and ‘Occupy’ the government building this friday. There has to be some resources supported by groups. As I visited the rally tonight, I noticed there were folks passing out bottled water, cookies, stickers, ribbons when needed. The organizers claimed there were over 120,000 participants on tonight’s rally. I was there to witness and observe although I believe National Education is necessary if we’re Chinese. I just think that we won’t be ‘brainwashed’ with the teaching materials controlled by teachers born and breed in Hong Kong. I’m still open to all the possibilities. I care about this very topic too.

This was an important day marked in Hong Kong’s history.

There were just a bit too crowded for me to do shoot just about anything. Too much blackness for the night anyway…And I was restricted to go anywhere but stay stationary. I managed to find myself a path to circle thru the area once. I couldn’t sweep for anything stood out. That was it.

There’s a Day 2 coming right up!