To Kwa Wan is a district right next to the Former Hong Kong Kai Tak International Airport. It’s my first visit to there. My first impression to the district is pretty much untouched since the early 90s. Buildings there remarks the era of that time.

It’s an old district. What does that mean? It’s full of retired/old residents. And occasionally I see Southeast Asians as well. Most of the people who lives there are below the poverty line. The district is very relaxed with not much going on around. No huge shopping malls whatsoever. And people hang out on the streets.

Napping at an auto repair garage

While To Kwa Wan is not as vibrant and full of energy like in Kowloon City, it still has its charm. There’s no Coffee cafe or Bistro. It’s full of Cantonese cafe. I’m sure there should be some good ones around which I haven’t spend time discover.

Old lady on the street

I walked around to feel the environment. I thought it’s best to capture the older generation folks and the auto shops which you would see in this set.

There’s not too much going on but I captured what I see and meant to me from my first visit to the district.

Old lady working with her trolley

Man on the street

Lady and her dog

Just woke up (had a nap, skipped my dinner). I had dreams of my college years. I had a dilemma if I would be different, if I was already photographing back then. One thing I know for sure, I did not have photos of me taken during my stay at universities. I’m quite regret.

It’s been more than a week since last time i posted pictures of my street photography. As promised, together with the results from 21mm.

It was a quite a challenge to adjust from 28mm to 21mm when shooting on streets. Not only because of the focal length, but also the extra components that needs to be added to the GRD. Frankly, I was skeptical if it’s even necessary to use the GW-2 (21mm conversion). Well, I really had spent my past two weekends to see the difference myself.

I have nothing against the original 28mm GR lens. I just did not want to see my GW-2 sitting at home covering with dust. The extra component added weight and little bulkiness to my GRD setup. At the end when I compare the size to my X100, the GRD+GW-2 is really only slightly longer with the conversion kit. The gear has not too much influence when I’m really shooting. I found myself when using the 21mm, it encourages me to go even closer to the subjects. It’s also because I wanted the shots, so I adapted by stepping up to people and get into zones.

Newstand owner: What I sell is bad for you, read book instead.

When shooting on the first weekend, I was mainly framing thru my OVF. I slightly messed up my distance with the OVF. After that weekend, I told myself not to be fooled by what I see with the OVF. I needed to program myself to get into my zone prior framing my shots.

In my second weekend, I felt I wasn’t pressured to shoot. I cleared out my mind and did random shooting. I really think I carry this mentality every day.

World stops with ipad and cigarette

Alright the following ones are from the first weekend of shooting.

My conclusion to the 21mm. It’s totally possible to shoot street photography. Image clarity is acceptable when ISO setting is below 1000. Anything higher than ISO 1000, the image tends to be blurred with the distorted megapixel (not motion blur). It’s best only using during the day.

I’m currently messing with black and white. I have not touched my X100 for weeks (covering with dust). At some point last week, I was thinking about selling it to fund for an iMac. But then It’s always good to have a spare camera around, moreover it’s a great piece of gem. It makes good photos too.

Alright the B&W had much to do with a few photo books I bought over the weekend, including Daido Moriyama’s “To Another Country” (published in Asia). It’s a day to day journal like writing of what he’s doing/thinking at the time he’s traveling for photography. There were some photos but not in particularly good quality. I wish to see more. So I’m thinking about getting more from the black and white master – Daido Moriyama’s Record photo books. Plus, also thinking about order from Amazon. Oh yea, I want to expand my photographic knowledge by seeing others’ work.

I’m very moved by his dedication to his passion – photography. He’s 74 this year, a few years older than my dad. Given the fact that Moriyama san drinks and smokes quite regularly, he’s still in shape doing his work. I’m very glad he’s still enjoying his life very much. As he had mentioned in his book, his life is at the stage of late autumn and entering winter. He also wishes himself he could still be in good health, and carry his little camera, walk to places he wants to. He was 69 when he wrote that. I very much wish him in good health and produce more work for the world of photography.

Shek O is the far southeastern side of the Hong Kong Island. It’s remote, away from the urban city. The natural landscape can still be seen in this area.

I brought along my GRD + GW-2 with me just fulfill my 21mm mission (a little detour from my street/candid). I did not get much time to play with my camera on a hangout day with my friends at a BBQ site, only managed to snap a few. The black and white photos were originally under cross process filter. They look pretty good with the cross process but I felt like b&w is more of the universal timeless thing. So here you go. As you can see the one below is the original taken by my buddy. Quite different ha? 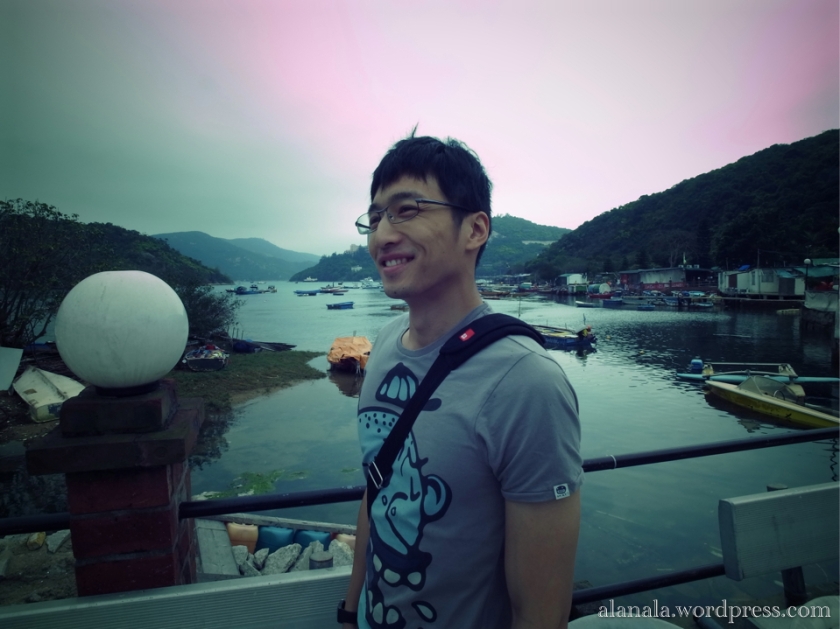 Thanks to my buddy Rex for snapping a portrait of me.